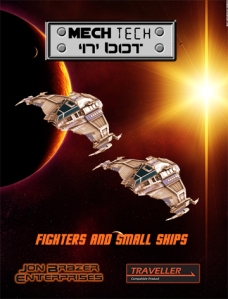 Far future universes need machines and technology that makes the average spacefarer’s life easier. Everything from the robots to computers to weaponry and vehicles, the future should feel exciting with tech everywhere. Ideal for any setting, Mech Tech ‘n’ bot is your supplement series to making your game feel futuristic.

Ships streak across the sky, carrying cargo and passengers within a solar system. Fighters battle pirates and other disasters of space. This indispensible tech keeps the wheels of commerce flowing from outlying bases and outposts to major worlds. Fighters and Small Ships details these support vessels for your game, making your universe come alive.

Ready to ride fire with the hottest walkers this side of the galactic core, Mech Tech ‘n’ bot: Mech Squadrons brings you over eighteen walkers for you to blast your way through any obstacle. From the small two-legged MegaHerc construction mech to the heavy, six-legged Barga artillery tanks, this supplement contains walkers ideal for every use. Additionally, mass combat stats are detailed for squadrons of each mech described, helping you and your players to have epic battles.