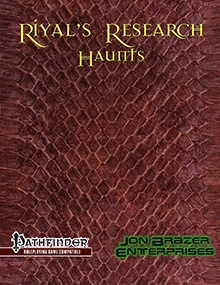 The great adventurer, abjurer and researcher, Riyal Starlight, has explored much of the world. Throughout his travels he documented many of the dangerous and unusual hazards he has lived to tell the tale. Now within these pages, he shares his findings with you.

Riyal’s Research: Haunts brings you two dozen new haunts for you to endanger your player characters’ very lives. These haunts range in CR from 1 – 15 and include haunts inspired by movies and books throughout the fantasy/urban fantasy genre. These haunts detail the power behind deadly chants, talking skulls, cliffs of insanity and flooding rivers. These murderous menaces will enhance your world and your adventures.

Check out a preview of the haunts within right here. Grab these haunts at Paizo and DriveThruRPG/RPGNow.com.