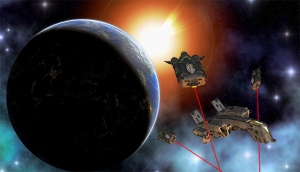 I’ve been thinking of adventures lately and this one just sprung up in my head. As such, I thought I would share it with you. The basic adventure is simple: the ship the players are on crash lands on a moon of a gas giant. The players survive but they need to make repairs if they are going to get back to civilization.

Introduction
The ship the players are on crashes on a moon orbiting a major gas giant. This can happen in a number of ways: a small piece of space junk strikes the craft forcing them to crash land on the moon, pilot error in the gravitational zone knocks the ship off course, an error in the ship’s computer calculation causes the crash landing, pirates could have shot them down, just to name a few options.

Beginning the Adventure
Everyone should take 1d6 points of damage. The ship is still intact, however, it list half its hull. Internal sensors reads that a number of small cracks were formed during the crash and the ship is leaking air. The power plant sustained the worst damage. Several parts are required before it will function properly again.

The leaking air is not a problem at the moment. The moon has a thin breathable atmosphere and the surface is rocky. A Sensor check reveals that there are a number of other large hunks of metal, potentially crashed ships, each several hours away (the distance itself is less important than the time it takes to get there) in varying directions.

The players should choose which ship they want to go to first. The sensor read outs and what the players actually find once they arrive are as follows:

1) Readout: The metallic area is spread over several kilometers. From the amount of wreckage it is detecting, the computer estimates the ship was a 1,000 ton light freighter.
Actual: The ship was a 1,400 ton freighter, however, others that have crash landed on this planet and escaped found parts here. Everything the players need to repair their ship’s power plant is present. However, the ship’s components are scattered over a large area (-2 DM to all search checks), and the part the players need will require repairs before being installed (-4 DM to all checks with their ship’s operations unless the part is repaired). Paskrin have move into the area and have made the ship’s component’s their home. Some new food
Paskrin
Str 3 Dex 4 End 6 Int 12 Inst 6 Pack 9
Attack: Gnaw +1 (1d6)
Athletics (coordination) 2 Melee 2 Recon 3 Stealth 1 Survival 3, Armor 1
Tiny (-1 DM to hit creature)
Movement 6 m

2) Readout: A small ship is the closest. This is possibly a 50-100 ton shuttle. It could be larger; some of this craft is buried.
Actual: This is a 200 ton jettisoned garbage hauler container that crashed here a relatively recently. It contains lots of hazardous and radioactive substances that are not properly disposed of. If the players stop to investigate it more fully they will discover the insignia of a corporation. This might be proof that the corporation handling this cargo is transporting and disposing of such materials improperly.

3) Readout: A 400 ton patrol craft is split in two pieces (forward section has separated from the aft).
Actual: This ship has been here quite a while and has been picked over quite extensively by others that crashed here and made it off or scavengers. Spiders currently infest this ship, making it a battle to get into and out of the ship.
Goliath Spiders
Str 12 Dex 16 End 10 Int 7 Inst 6 Pack 2
Attack: Bite +3 (2d6+1) Venom DM -2 Venom Paralysed
Athletics 3, Melee 1, Survival 2, Armor 2
Movement 15 m

4) Readout: From the lack of erosion, this 900 ton cargo ship appears to be the newest of the ships that crashed here. It is also the furthest.
Actual: This ship has the required parts. They sustained no damage during the crash.
This ship was transporting illegal cargo that turned dead bodies into soldiers. After the crash, the machines crawled into the minds of those that died during the crash and killed those that survived the crash. After two months without fresh bodies, recharging sources or other maintenance, only 8 are still functioning.
Necro-soldiers
Str 8 Dex 6 End 5 Int 6 Edu 14 Soc 8
Melee 3 Gun Combat 2, Recon 2
Equipment: Pistol
Special: Electroshock, Seek New Host
Electroshock: The necro-soldier shocks a creature that it grabs or attacks with a metal melee weapon, dealing an additional 1d6 damage. Electroshock requires an hour to recharge.
Seek New Host: The computer core of a necro-soldier can leave a host body and seek out a new corpse to take over. These cores use a series of small tentacles to pull itself out of one of the body’s ear and seek out a new host. The core at this point has only its Structure to protect itself.

Unless the players sealed up the leaks as soon as the ship crashed, several ants have crawled in and are keeping warm near the ship’s engines. More then likely, the ants will fight the ship’s crew before installing the new part.

Please tell us what you thought and if you would like to see similar short adventures for your Traveller game. The creatures stats for this adventure come from the Creatures of Distant Worlds Compendium. Download it today at DriveThruRPG/RPGNow.com and at d20PFSRD.