Later this week, Jump Angels and Demons makes it debut as the 7th release in the Creatures of Distant Worlds series for the Traveller RPG. So you’re probably asking, “What the heck is a Jump Angel or Jump Demon? This is Science Fiction for crying out loud, not Dungeons and Dragons.”  That’s a very good question, allow me to provide some background. 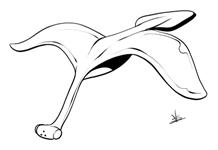 Jump Angels and Demons draw on three major sources of inspiration: Vorlons/Shadows from Babylon 5, Phantoms from Final Fantasy: The Spirit Within, and those sonic-sight, hammerhead creatures from Pitch Black. If you haven’t seen either of these movies or the TV show, go netflix it. All of them are well worth your time. The initial idea came when I wanted something for my players to do during a week in jump space. My players liked jumping because it allowed them time to train, but I couldn’t help but feel that these are lost opportunities for role playing. I remembered staying up late to watch the Outer Limits and remembered some episode of deep space travellers having problems because of some phantom that lived inside their engines. I thought, “Cool, how do I do that.” My solution: things live in jump space and they can fly through the any kind of matter of a ship like we do air. So I worked from there and extrapolated: they can’t be harmed by physical weapons like bullets and swords, they are harmed by energy, they attack by flying through their target instead of with a gun or claw. When they do they steal part of the person’s “soul” causing them damage similar to a physical attack.

Are they a bit of Science Fantasy, yes, but you never know what creatures do live in alternate dimensions and how they exist. And who knows what we might find when we travel between the stars.