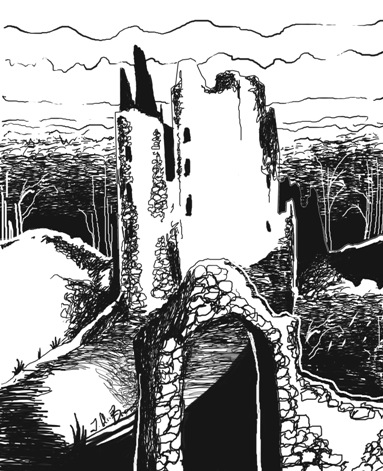 The most characteristics part of Shadowsfall, besides the constant near-total darkness that the plane experiences, is that this twisted version of the material plane absorbs the lost, forgotten or destroyed aspects of other planes and alters them to be as distorted as the rest of the plane. Toys left out by children never to be seen again appear on Shadowsfall. Castles and villages that are hundreds of years old and get covered by dirt and dust find their way to the plane of shadows. Creatures hunted to extinction find new life on Shadowsfall.

All of these places and items ending up here result in the plane ever expanding. While many legends tell of Shadowsfall constantly rearranging itself, it actually is merely making room for new additions. So while a town on the plane of shadows maybe adjacent to a castle one day, a new graveyard may appear between them the next, pushing the two farther apart. And there are times when an expansion in one area pushes some well known place while another place remains unmoved. So if you had to travel Northwest from the Blackbat to reach the Gloom Pass through the Razor Mountains one day, you may have to travel Northeast another day.

As you can imagine all this expansion produces a considerable number of Shadowquakes. Observers describe a shadowquake as a fissure opening up in the ground, pushing new land masses up. Sometimes whole building or ruins or the remnants of a once lush forest are pushes up along with the land. Sometimes those structures are whole and intact. More often, however, those buildings are half collapsed wind up sticking out of the ground at an odd angle. This more than anything else is how the plane of shadows gets it characteristic look of being a twisted version of the material plane.

Next week we talk about the twisted creatures that call Shadowsfall home.