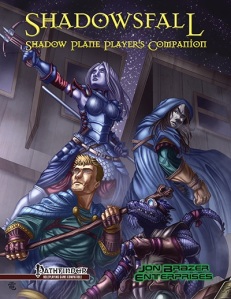 Fight the Dark Side

Create your own dark hero to set against the twisted landscape and cruel foes of the plane of eternal night. Players and game masters are introduced to the vital Shadowsfall trappings needed to incorporate the Plane of Shadow into any Pathfinder Roleplaying Game campaign. To combat the undead hordes, vampiric flora and cruel, uncaring Shadow gods, gamers are privy to new player races, feats, spells, class options and deities as well as the Plane’s infamous mutable geography and stark city strongholds.

What Stories Will They Tell of Your Character?

Shadowsfall: Shadow Plane Player’s Companion is a 32 page book detailing the Plane of Shadows for players in your campaign. Pre-order the print book and get the PDF right away for free. Or download the PDF at DriveThruRPG/RPGNow or at Paizo.com.