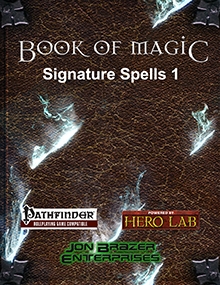 The greatest spellcaster’s create their own spells so solve problems common to them. We gathered up a number of our favorite spells and put them in Book of Magic: Signature Spells 1 and 2. One of these great is Rostov. The character was inspired by the character from Night in the Lonesome October and the player created several several spells that fit well. So, we are sharing a few of those spells with you to include in your game.

ROSTOV’S SNAKE STRIKE
School transmutation; Level bard 2, druid 2, magus 2, sorcerer/wizard 2
Casting Time 1 standard action
Components V, S
Target 1 touched creature
Saving Throw Will negates (harmless); Spell Resistance yes
You immediately grant one attack action to the touched creature at their highest base attack bonus. This action does not stack with haste or other forms of magic that grant additional actions. This does not change the creature’s place in the initiate order. The targeted creature acts normally on its next turn.