Pathfinder: A Free Ship, Just For You 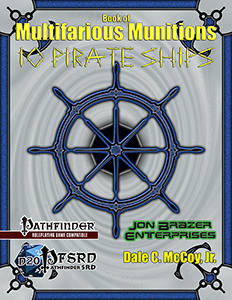 Last week, we mentioned that we are posting previews of recent releases. Previously, we posted a preview of Book of Magic: Insurgency of Summer. Today we are giving you a ship from Book of Multifarious Munitions: 10 Pirate Ships. The Vehicles section of Ultimate Combat presented a number of sample vehicles, however they were all mundane ships. So when I was designing 10 Pirate Ships, I knew I wanted a ship propelled by elementals. Something as magical as a ship propelled by elementals and as eerie as seeing a sailing vessel without sails would be highly iconic and memorable to any player. So to your game, I give you the Terror Trident.

Terror Trident
Modified Dromond Long Warship
Colossal water vehicle
Squares 112 (145 ft. by 20 ft.); Cost 90,000 gp
Defense
AC 2; Hardness 5
hp 1,680 (839)
Base Save +0
Offense
Maximum Speed 180 ft.; Acceleration 90 ft.
CMB +8; CMD 18
Ramming Damage 8d8
Description
Few need to see the flag of the Terror Trident to recognize this ship. Unlike most ships that sail the high seas, this ship lacks sails. The pair of eerily empty masts does not prevent this ship from moving. The goddess of piracy gifted her high priest, Captain Gavin Seawave, with 13 water elementals to push his ship. In return, the goddess demands that the crew of every ship they board be killed and thrown into the sea. The treasure, however, is to be divided by the crew according to their worth. The only exception the goddess allows to her mandate of death is if a prisoner bows in worship to the pirate goddess and will swear fealty to the hierophant and serve him faithfully.
Propulsion muscle (pushed; 13 Huge water elementals)
Driving Check none (Gavin Seawave commands the water elementals with his thoughts)
Forward Facing the ship’s forward
Driving Device the 13 Huge water elementals under the ship
Driving Space the area under the ship
Decks 4
Crew 48 (35 crew, 13 Huge water elementals)
Captain Gavin Seawave (NE male half-elf cleric 14)
High Acolyte Shirisha “Grunt” Bloodaxe (NE female half-orc cleric 3/fighter 10)
Weapons 4 +2 shocking light ballistae, 2 each mounted to cover the left and right firing arcs.

Greetings, I am Dale McCoy, Jr. Jon Brazer is the name of an old role playing character of mine, a Gangrel ghoul from a Vampire game. I live in New Jersey and I write role playing game material on a freelance basis. During the day, I work as an engineer and enjoy spending time with my wife.