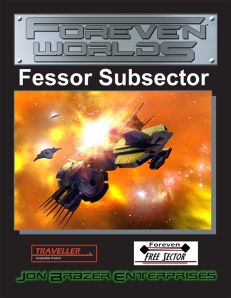 After a highly successful first day of Foreven Worlds: Fessor Subsector, we received 2 reviews. The first is a glowing 5 star review (thank you). The second is a 3 star review. The review’s author gave two reasons for dropping it two stars: 1) the map isn’t color and 2) the other planets of the sector do not have much, if any, detail. And well … he’s right. I should have done both. So I will be updating Fessor Subsector with a color map. It might take me a bit, but it will happen.

As for his second point, I’ll be sure to do that in the release for all other other subsectors, but I’m just going to post them here on my website for Fessor for all to have. I’ll post a few every few days. Please forgive that these will be unedited (my editors hate it when I do this). So here goes.

Dralib was the first world conquered by the Cornathian Empire. Their ships arrived in IY 971. The few hundred farmers working the communal farms knew they did not stand a chance against this force and surrendered without a shot being fired. More than two hundred years later, the descendants of the original colonists, known on world as Drians, are vastly outnumbered by those that moved here after the conquest. The IPF, Imperial Peacekeeper Force, routinely arrest Drians, claiming they were thinking of starting trouble and point to planted objects as evidence of such intent. The Drians have tried appealing to the planet’s ruler for relief from such persecution. While Governor Frinsk claims to be sympathetic to their cause, no change in the IPF’s actions are yet apparent.

Despite being a frequented trading stop between Alespron and Reidian subsectors, the people of Magnef live in perpetual poverty. The wage laws allow corporations to pay their employees so little, the people live in near-squalor conditions. Even when corporations do break such flimsy laws, there is little recourse for the several million people that live on this world. The only time the planet’s nobility go after such corporations is when they cause serious environmental damage. Recently, several hundred tons of radioactive waste material were discovered on a remote moon of the system’s only gas giant world. The only reason it was discovered was that the noblewoman that owned that world, Lady Bedia, decided to set up a pleasure dome on that moon and was unable to do so because of the unexpectedly high radiation levels. She used her influence to get the planet’s police to find the responsible party. The investigator placed the blame squarely on the crew of the Iadria Zhdev, a ship owned by Iadria Vlovl. Since the corporation received word of such an accusation, the company has ordered the crew to a different section of space. Lady Bedia is now searching for some mercenaries to bring the Iadria Zhdev and her crew to justice.

2 thoughts on “Traveller: Foreven Worlds: More Info on Other Worlds”