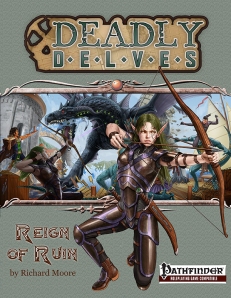 Next week sees the release of the Pathfinder version of the Deadly Delves: Reign of Ruin. Some monsters are new and others are existing monsters with the half dragon template added to them. Yes, this dragon has been busy! Right now I want to share with you two of those half dragons in this adventure. We hope you enjoy them in your own Pathfinder campaigns.

If you download The Book of Beasts: War on Yuletide between now and November 30th from DriveThruRPG/RPGNow.com, Paizo.com, or d20PFSRD.com, we will donate half of the proceeds to Food Bank of South Jersey. Download today and tell your friends.

Download the Deadly Delves: Reign of Ruin for Pathfinder at DriveThruRPG/RPGNow, Paizo, and d20PFSRD.

Download all of our Deadly Delve Adventures for the Pathfinder Roleplaying Game at DriveThruRPG/RPGNow, the OpenGamingStore, and Paizo.com.