All week long, we are sharing with you some of what is inside The Rose of Death for the Prelude to War Adventure Path. Yesterday, we gave you a closeup look at the cover. Today, we are talking about the adventure itself. 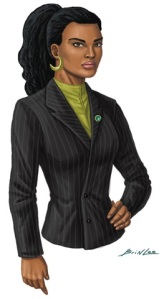 First and foremost, this Foreven Worlds volume is an adventure. It is here in the first few pages of this volume that the players meet Juliet Klein. I say, the players meet her because your characters have already met her. They do not know her well, but that will change over the course of the adventure path.

So who exactly is Juliet Klein? First and foremost, Ms Klein is the person hiring the Travellers for a series of jobs throught the Foreven Sector. Where does she get these jobs? Well, she’s a member of the Imperial Secret Services. That’s right, Juliet Klein is a righ-ranking Imperial spy, and your characters are her assets. Why are you doing her spying for her instead of she doing the work? Like I said above, she’s paying you, but also she needs to maintain deniability. If these mission goes wrong, the Imperium does not want to start a war over this, and that is exactly what might happen if she were to be caught and her true identity discovered.